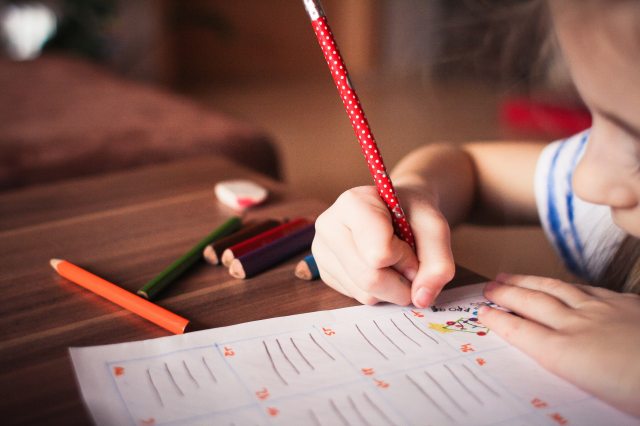 I seriously HATE doing school with my 11-year-old. I think people have the mistaken idea that homeschooling moms have extra patience; what I really have is PTSD. Don’t get me wrong – he’s a smart kid, but he just hates school, especially language/phonics. He’s been doing similar stuff for years, but he still acts like putting things in alphabetical order is akin to college-level calculus. Some days I just roll with this, but other days it makes me want to stab something with an ice pick. With my first four kids, I participated in a private/co-op school, and I wasn’t exclusively responsible for teaching any of them to read, and I have that same advantage with my kids now. My oldest was reading chapter books at 6, and my other kids were pretty much on-track as well, though some (my adult daughter) aren’t much for reading for fun. We had moved when my 11–year-old was in kindy, so it was up to me at that point. And, I suck at teaching reading, apparently. It is tedious, brain-melting work when a kid isn’t particularly cooperative. While he’s pretty much caught up in his reading skills now, it was slow going, and he’s still a really bad speller.

I am not a good teacher. Not even close. I have both a sister and two sisters-in-law that are unbelievable early elementary teachers – as good as any that I’ve met with a degree. They are creative, committed, enthusiastic and come to their class prepared every single time. That’s not me. I show up and get it done, but it’s pretty utilitarian. That works fine for my kids that don’t mind school. (My 7-year-old daughter has always been completely into learning, and we get everything done and out of the way in record time.) If all my kids were like that, I’d probably be one of those self-righteous moms that thinks that parents with kids that struggle are just slackers. I mean, I am a bit of a homeschool slacker, but it’s not an issue with most of my kids. Luckily for me, kids are pretty dang resilient, despite our failings. My kids do fine, in spite of me, really, rather than because of me. My oldest son is studying for a degree in computer science, my adult daughter works at an office job for an engineer, and my 17-year-old works part-time around her class schedule and teaches piano, so I’ve done okay so far.

I think (at least, I really hope so) that all moms have things like this – things that we have to do, that are important to us even, but that we really aren’t that great at. I consider myself extremely lucky to have other moms around me that are also passionate about creating a healthy learning environment for kids and are willing to spread that love around. While I’m sure that more of you public school than not, the idea of having a tribe in your corner is pretty universal. My co-op tribe inspires my kids and brings out the best in them in a way that I just can’t. (For example, I have never heard my 11-year-old whine at a co-op teacher. Ever. He just does his best and gets on with it.) They tell me that they appreciate what I bring to the table, though I can’t help but feel that I get the better end of the deal. Sometimes, just knowing that someone else knows what you’re dealing with makes it so you can get up and fight (hopefully not with your kid – Ha!) another day. That, in my opinion, is priceless, indeed.