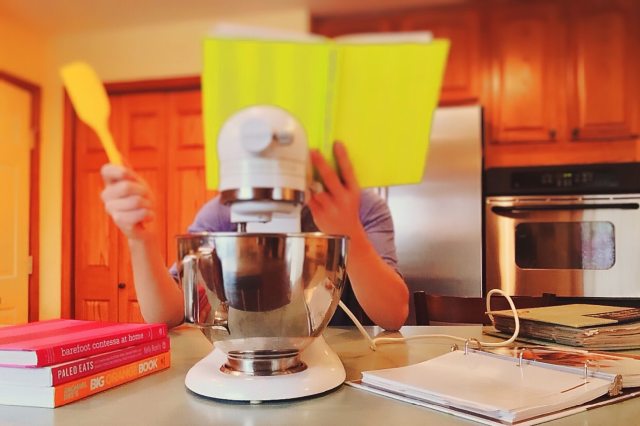 I’m a person who has always appreciated steps and methods. I learn incredibly quickly if I can dig into something, play around with it, see what happens and adjust. I have almost an insatiable drive to learn when I can see clearly what is expected from me and what the results of my efforts are. I’ll play around with this process indefinitely, dare I admit – obsessively, when I’m seeing results, but I have a short string of patience when something is awry. This analogy, I think, is a good explanation of how this moves in my life.

When I was young, I was raised in a family that had very specific tastes. I was fed every day from a rotating menu that didn’t vary much, and I didn’t really mind. The consistency was nice and even though it wasn’t all my favorite, I knew what to expect. As I got older, I was given the opportunity to choose a recipe of my own. My parents made sure I knew that there were other recipes but that our family recipe was the truly right one for us, and I would be making them proud to select it as my own. I trusted my family, and I did.

Soon, I had a kitchen of my own. I was excited to take out my gilded recipe card and prepare it for my own family. I carefully read, painstakingly measured and put everything in the oven to cook. When I pulled my dish out after the allotted time, my heart sunk – something was wrong. It looked soupy, mushy, not properly cooked. I tasted it; it wasn’t delicious. What had I done wrong?? Still, this initial failure didn’t set me back too much. I was inexperienced. I would try again.

And, I did. I believed in my recipe – it was a family heirloom, spanning generations in my family. So, I spent months, years, decades trying to determine why I couldn’t recreate it properly. I became frustrated with my self, frustrated with my family for not wanting to eat what I made and frustrated with cooking in general. Maybe I just wasn’t a good cook. Had the gene skipped me?

Then, I stepped back. Maybe? Maybe the recipe was off? Maybe it hadn’t been transcribed very well? Maybe the ingredients I was provided were rancid. Maybe the kitchen assistants I’d been assured were the best money could buy were actually spiking my sauce with something gross. Maybe it just wasn’t to my taste. Maybe I had been given a wonderful marinara sauce when the truth was that I actually really, really prefer Mexican cuisine. Maybe it wasn’t me at all. Could I look at other recipes? Was it okay to even ask these questions? I felt like I had to because if I didn’t serve something, we were all going to starve. Either way, that recipe was getting tucked firmly on the back of a shelf because I wasn’t going to keep wasting ingredients when I didn’t even know how to fix it. Anyone who I couldn’t solidly identify as a kitchen helper was getting fired, at least temporarily until I sussed out what or who the issue was.

It’s not that spaghetti is bad. It’s that there comes a point when it’s okay to choose to not engage in processes that clearly don’t work for you. I don’t mind when people eat spaghetti. I celebrate people who have an aromatic marinara sauce and have mastered it. I don’t need to order the same thing from a menu to love, respect and sit down to dine with my Italian-loving friends. Choosing to put away a recipe that has failed me doesn’t mean that it can’t work for you. It doesn’t mean I gave up or didn’t try hard enough. (I would venture that recipe failure makes you even more precise in following instructions to the letter.) And, the fact that spaghetti is your favorite food in all the world doesn’t mean that it will be mine. The truth is, I’m a Mexican gal, through and through. When I have the space and the freedom and the ability to play in the kitchen without the pressure to be an Italian goddess, I make very, very good food. I’ve chosen to direct my energy in the kitchen to recipes that I’m able to work with more successfully. I AM a good cook, but I’m making different dishes than what I thought I would when I was a child.

Personally, I think variety is the spice of life in and out of the kitchen to bring the analogy full circle. It’s beautiful to embrace your personal food history, but it’s also really, really nice sometimes to visit other people and try new things. And, when you’ve tried for so long to make something fit, it can be downright refreshing.